Leg 2, day 3, 1700 boat time, 1099nm to go, 9.0 knots, 099T
Writing the blog has been something of a challenge lately...before arriving in Horta, we had some pretty rolly days, Horta was hectic and the last two days have been, how shall we say...challenging!
As we’ve only managed one blog on leg 1 on day 3 (has got to be something psychological about this day 3 thing), a quick update on what ended up being a very slow Horta trip.
THE ENGINEER’S CORPS
We continued to have one more day of good winds and then it sort of died down. Too little to sail by, but also too far from Horta to be able to motor at our normal cruising speed and rpm’s. Good thing therefore that on our last East-West crossing we managed to make 2 days of fuel last 5 days...by doing no more than 1000rpm (compared to a normal 1700) and just going slow. We managed to squeeze lots more hours and more importantly lots more miles out of the diesel we had left. With this in mind, we turned on the engine and put her to work at 1000rpm...but were going really, really slow. Even though being at sea teaches you some patience, having 1450nm to go and doing 5 knots made us all a touch restless...and so the testing and calculations started: checking on the exact litres the day tank could hold between full and the first looking glass, upping the revs up to 1450rpm and calculating....would it work? It seemed that if we had to do this the rest of the way, we might just make it!
To be on the safe side, another test was in order with the complete day tank, confirming our calculations! Yay! Speedy Gonzales here we t come!
THE FISHERMEN
Yes, we hooked them! Twice!
The first one was on day 4: a nice, ‘two-meals-for-six’ size Mahi Mahi, which was devoured the next day.
Then day 11 we hit the mother load! Just before dinner, the wheel clicked away at great speed and it was clear this was going to be a big one.
Franky set out to wheel it in and we got all hands on deck...in a bit...fish diving down...in a bit more....with 20 meters to go somebody yelled ‘It’s a shark!’ but it turned out to be a big swordfish!
It took Boogie and Leon on the hook to get it on board with Franky still reeling it in.
After filleting and some ‘straight-of-the-fish-sashimi’ we had 6 massive fillets left...delicious!
THE WELCOME COMMITTEE
In good old Acores style, we saw Pico, or rather it’s volcano, from 50nm away...and not much later we had a proper welcome committee in the form of a big pod of dolphins! Close to the boat, jumping and diving, they seemed to have as much fun as us watching them.
Another welcome committee was on the dock when we arrived exactly 14 days and 30 mins after going through the bridge in St Maarten, catching our lines and assuring us we had made it in time to get a drink at Peter Sport Cafe, the world famous sailor’s cafe in the middle of the Atlantic. Well deserved!
HORTA
3 nights and 2 days saw us going through the joblist quite quickly, with a new painting next to our last one from 2 years ago, a diver checking out our underwater issues, the black water tank opened and new provisioning brought on board. Franky and Bart managed a quick tour of the island on their cool scooters, marvelling at all the natural wonders Faial has to offer. The rest of us vowed to come back and explore another time.
THE SAILORS AND THE SAILOR GIRL
Sunday morning early saw us getting our last things in order, garbage off, water topped up, group photo with the new painting (will post when not on satellite anymore!), last goodbyes to Duncan our trusty local hero.
All packed up in our gear, we left the dock under big rolly clouds and a good 20+ knots of breeze, with the promise of more. Three reefs it was therefore and we set course for the European mainland, while sightseeing the amazingly beautiful islands from the water.
This time we had a double ‘goodbye committee’: not only were the dolphins coming and going and darting around for hours, we got a visit of two majestic whales in between the islands, spouting big plumes of water in the air and elegantly diving up and down giving us a glimpse of their black shiny backs... a fantastic goodbye to a short, but great stay in the Azores.
We’ve done some good sailing and have already seen 40 knots apparent (with the wind coming from behind, so true wind a good deal more!) which we harnessed under headsail only. Together with the big (3-5m, the big ones getting to 6m) seas, it’s making for a bouncy and rolly ride at the moment. The waves are magnificent though. Big rollers, one after the other, of deep deep blue walls of water, breaking crests that explode in white water foam. When you’re lucky, you can see the top of the wave going a transparent, almost translucent turquoise blue, making these ‘Caribbean crests’ an amazing thing to look at that never gets boring.
As I’m writing this, bracing myself in the chart table seat, we still have no mainsail up and are under headsail only, as we’re expecting another front to pass, hopefully just in front of, us tonight, which might bring some more 40+ knot winds. So everything is battened down for tonight and we’re continuing eating up the miles going East...
More later! 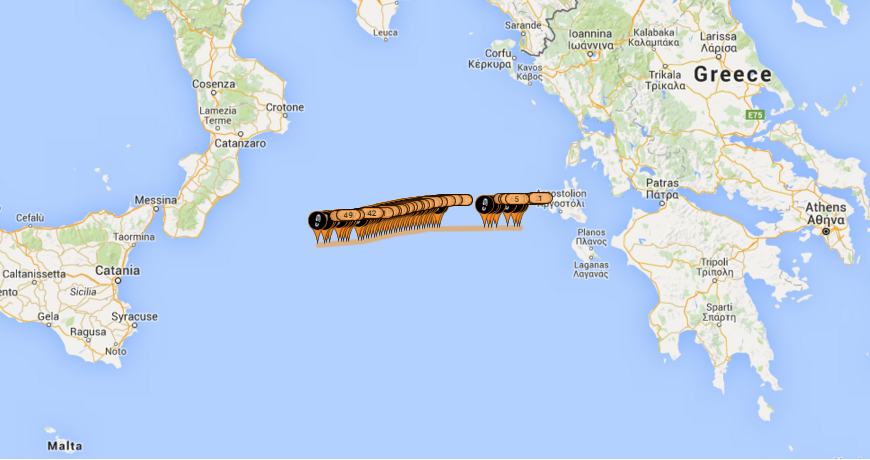